History of the Trumpet 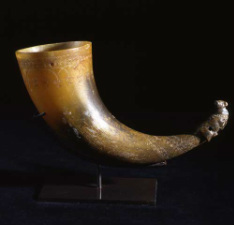 The B Flat Trumpet is one of the oldest musical instruments, and has the highest playing register in the brass family. This trumpet originates all the way back to 2000 b.c., serving as a simple blow horn, to today's uses: as a modern band instrument (1).

Below is a timeline, clearly stating how the trumpet has evolved throughout the centuries.

2000 B.C. - Early Trumpeting
The trumpet begins as a simple blow horn, used in Ancient China, Egypt, and Rome as a signalling device for military and safety purposes. At this point, the trumpet resembles a gradual funnel: lacking valves, and any resemblance to the modern trumpet. Generally, the first people used conch shells or old animal horns as crude versions of the trumpet.
1500 B.C.
As time passes, the trumpet evolves into an instrument for ceremonies and religious rituals. In Israel, the horn becomes a major part of their religious ceremonies, and in both Tibet and Rome the trumpet is used in magical rituals to ward off any evil spirits (3).

14th & 15th Centuries - A Tool of War
Up until the 14th Century, the trumpet remained as animal horns and conch shells. It wasn't until then that the trumpet lost its prehistoric qualities, and the animal horns made way for silver or brass trumpets (2). As the trumpet became more recognized, people began to realize that not only could the trumpet amplify sound, but one could also manipulate the air out-put to create different pitches. In medieval times, only a select few were given permission to learn to play the trumpet (only males), and many armies used the trumpet's change in pitches to convey messages (2). 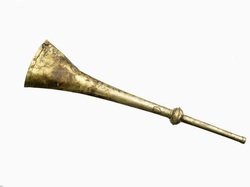 16th Century
As the trumpet continues to widen its markets, Germany becomes the forerunner in trumpet production. At this time, the trumpet is still limited to mainly military and ceremonial occasions, but by end of the 16th century the trumpet began its uses in musical applications (2). By now, as it becomes possible to bend metal tubing, the trumpet is formed in three different configurations: "The Circular Horn", "The Trumpet", and "The Bugle" (3).

17th & 18th Centuries - Musical Horizons
Throughout the 17th and 18th centuries, the trumpet's musical abilities were fully recognized, and composers of the time began using the trumpet in their compositions. This included pieces by Hadyn's brother and Mozart's father (4), as well as the trumpet's introduction to the opera in 1607, Orfeo written by Claudio Monteverdi (4). Along with the trumpets' uses in music, it still spent most of its time as a ceremonial instrument (2). 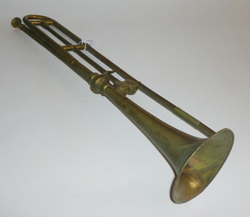 19th Century - Introduction of Valves
It wasn't until the 19th century that valves were introduced to the trumpet. The earliest valves were invented in 1814 by Henry Stölzel named "The Stölzel Valve", and then four years later Mr. Stolzel collaborated with Friedrich Blühmel to create "The Rotary Valve". These new additions to the trumpet made a change in pitches by simply activating one of the valves, allowing the chromatic scale to be played evenly (2). Prior to this innovation, the different notes relied on the skill of the player, and were much more challenging to obtain. Over the next couple of years, the final two versions of valves were created: "The Berlin Piston Valve" (1827), and in 1938, François Périnet invented "The Piston Valve" that most brass instruments use today (5).

Present Day Trumpet
Throughout the centuries, the trumpet has evolved through its uses to the instrument we play today. It is mainly played as a band instrument, and is composed of either silver or brass metals. With its three valves, the trumpet is capable of playing the full chromatic scale, and can be found in any region of the world.
Powered by